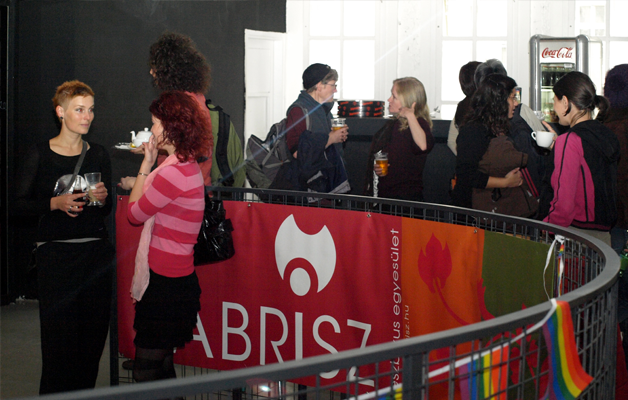 “This country is my country. Whether it wants me or not!”

This country wants it and doesn’t want it at the same time. This is why we have been working, as suggested in our slogan: for fifteen years, inside the law. In November 1999, the court registered the group of friends who had been meeting for three years as Labrisz Lesbian Association, whose aim was to help lesbian, bisexual and trans women with coming out and accepting themselves. This festival is about these fifteen years, about the never changing goals and about remembering.It is also about the usual things at LIFT Festivals: human rights movements, work, relationships, sex, films, literature and fine arts – thanks to our volunteers and partners from Hungary and abroad, from women’s point of view. This year you can participate in a variety of interactive workshops, where you can re-dub films, create together, learn self-defence or dancing – the latter might come in handy at Saturday’s women’s party. There will be concerts and film screenings, entertaining and serious topics. And with the intent to create a new tradition, together with representatives from other minority groups we will look for the reasons that motivate us to choose voluntarism as a lifestyle. Although this topic is the realization of an old idea, it is especially relevant now, when Hungarian civil society is under attack by the government. At the ninth LIFT we celebrate ourselves – women and activists. And we hope that next year we can celebrate the festival’s tenth birthday itself! Because do as the government may, we have been working together for fifteen years, legally (inside the law), and we will not compromise. Because (to quote Galgóczi again)

“compromising is like a pair of laddered stockings. It ladders further – and in the end one is nothing but ladders.” We will not compromise because fifteen years ago we set it as one of our goals to help this country truly become ours. A place where any woman can freely express and live her

Join us at this year’s festival! Awaiting you inside the law and inside LIFT: