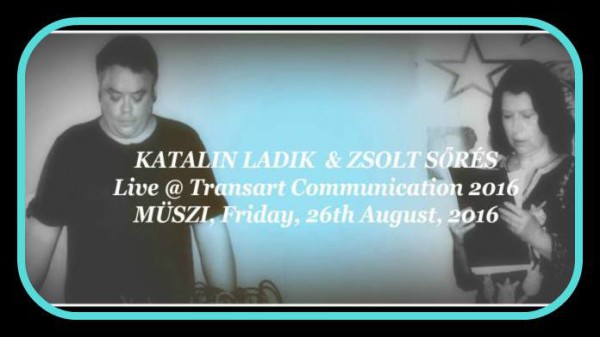 KATALIN LADIK and Zsolt Sőrés are working together – mainly in a group project ‘Spiritus Noister’ – for over 20 years, but now for the first time they will play a full concert in a duo!
✖
∆ KATALIN LADIK is a vocal artist, a poetess and actress in experimental film, theatre and multimedia performance, radio art, visual and sound poetry close to Fluxus since the sixties in Yugoslavia and later in Hungary. Hungarian speaking from Novi Sad, she is living in Budapest since 1993. In her performances during the years 60’s, 70’s and 80’s, she has slightly transgressed the taboos linked to the woman’s situation and the use of woman’s body and appearance inside the macho Yugoslavian society. She is now the recipient of the ‘Lennon-Ono Grant For Peace’ in 2016 for her work – alongside with Chinese artist and activist Ai Wei Wei, British-Indian artist Anish Kapoor, and Danish-Icelandic artist Olafur Eliasson – and involvement for the freedoms of expression and art in the former eastern bloc and during our recent contemporary period.
As well as KATALIN LADIK is guest starring on Inexhaustible Editions August 2016 double CD release ‘ie-004-2: I Belong To The Band (Jean-Michel Van Schouwburg, Adam Bohman, Oliver Mayne, Zsolt Sőrés): Bakers Of The Lost Future’.
✖
∆ ZSOLT SŐRÉS is an improvised/electroacoustic and noise musician, sound artist, conceptual artist, experimental music composer, editor, performance and conceptual artist. He is playing on viola, 5-string viola, toy synthesizers, circuit bent toys, dictaphone tapes, lo-fi sound sources, contact microphones, effects, objects. Since 1992 he works in the fertile areas suggested by the best elements of contemporary improvisation: non-hierarchical group interaction, static structures to quick changes, silence to noise, and sound to music. He is keenly interested in all of the sonic potential of his instruments to build up and break down instantly composed structures built with intricate detail as well as broad gestures.

Hope to see you on Friday!