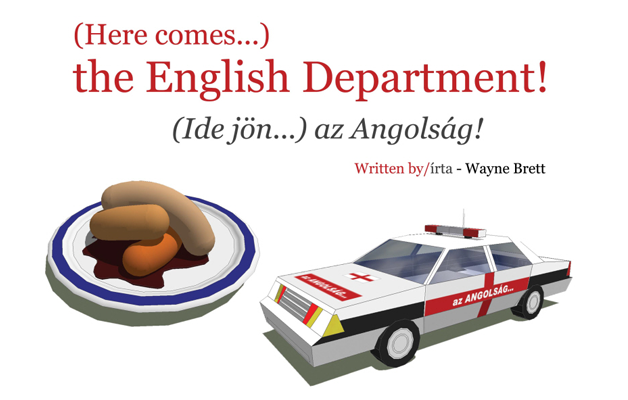 A new absurd comedy stage-play written by Wayne Brett, in English, with just a little Hungarian, a couple of utterances in French and one German word…
at MUSZi Arts Centre
Tickets: 1450 ft in advance / 1950 ft at the door
Get your tickets online now from www.tickets.DanubeEvents.com
Advance tickets may also be purchased in person from 1st February from The Caledonia (Mozsar u. 9) or Treehugger Dan’s Bookstore (Lazsar u. 16)

Set in Budapest in 2005, a year after Hungary joined the EU, we follow a group of three Brits who’ve all moved to the country for their own individual reasons. The locals are welcoming, curious about the oddities and motives of the outsiders while proudly offering up their own angle on how it all is. Deception, confusion and at some times euphoria ensue, especially when the missing gravy is found. Does anyone really know where they are going in this life? Look out for some tips from the top.

The venue is MUSZi Arts Centre, Blaha Lujza tér 1.
3rd floor of former Corvin Department Store. Entrance from Somogyi Béla utca. Look for the red door with the MUSZi logo on it!
Here is a Google Maps link: http://goo.gl/maps/xI714