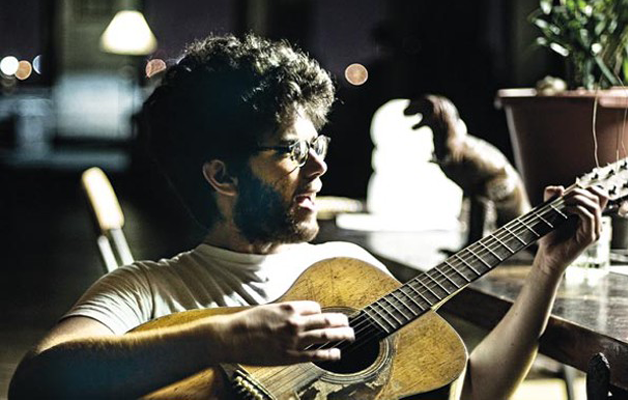 Sparse chamber folk can stir psychosomatic effects, as we learn from Boston’s folk developer, Saul Conrad. He specializes in the kind of music drawn from those attentive responses that occur like in moments when listening left of the radio dial to public/college stations, where divergent selections with different audio directions disrupt the normality in our day. In our debut of MacKattack Brigham’s stop-action video for “Fever”, things start off like a classic movie with Conrad’s silent film-like piano score given a viewing to a ‘goat in nature’ painting in progress.

Like a weirder episode of PBS’s The Joy of Painting with Bob Ross, Brigham brings this instructive class from an alternate heartbreak dimension where oil paints are applied while Saul sings about the side effects of breaking up. “I had a fever feeling when you turned away, now I can’t stop myself from bleeding”. In a strange call and eerie response, Conrad sings and the semblance of Mary’s voice echoes in, “Mary, why do you do this, why do you go there, why do you hear me”, while the temper continues to be painted on.

From unnerving to spirit assuaging, the timid disarming, “come to care” is sung with the piano and strings accompaniment to soothe, with vocals sweeping like the video’s applied paint strokes. Baring heart and soul, the mountain goat painting gets applications of rich, thick purple colors to match Conrad’s expressions. From green thickets to what ends up washed over in blood red swipes, set in what looks like the burned forest from Bambi. The sparse choral elements are joined by touches of guitar skronk that brings about a change in Saul’s expressed condition. From light feedback seesawing into a solo, that “fever feeling” turns into a “freedom feeling” by the end of the song’s rainbow of remedy story face.